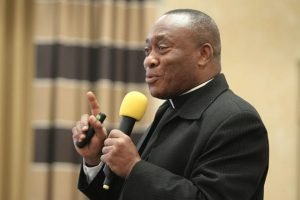 Timing What I have to Say

Have you ever been in a situation where family members or friends brought you to the point where you felt like “giving them a piece of your mind”, or “telling them off, or “telling it as it is” or defending what you had just said as “being direct and honest”? The temptation is to follow through with any of these emotions. Yet, Immanuel Kant, a German Philosopher had this to say, “All that one says may be true, but it is not necessary to say all that is true.” In his last discuss with His apostles, Christ, at a point said this to them: “I have much more to tell you, but you cannot bear it now”. This is called Emotional Intelligence (EQ); the ability to be attuned to the emotional state of others, their psychological disposition, and the possible impact of what you have to say.

Life, in general, is not just about what we want to say; it is also about when to say it. There is a saying that “An intelligent man knows what to say and says it, but a wise man knows what to say and when not to say it”. The book of Proverb says: “…a word in season, how good it is” (Proverbs 15:23) and that “A word fitly spoken is like apples of gold in pictures of silver” (Proverb 25:11).

Words are powerful, and once uttered have a way of staying imprinted on the heart. They forever become part of the record that cannot be unspoken or withdrawn. You can say “I have taken it back” and people may forgive you they will never forget. Words build or break peoples’ hearts, business deals, and human relationships. It is, therefore, important that as family members and in our relationships, we develop sensitivity to other peoples’ feelings, emotions, and psychological states. The book of James admonishes us “Don’t be too eager to tell others their faults, for we all make many mistakes” (3:1). The truth is that a few words spoken in haste can destroy a relationship that took years to build. We always need to consider not just what we want to say but also when we can say it. It is much better to wait to say what we need to say than to race and say it only to find out that we have only ignited anger, mistrust, disengagement, and chaos.

Time is not always “now” for everything, and more important than what we have to say is when and how to say it.