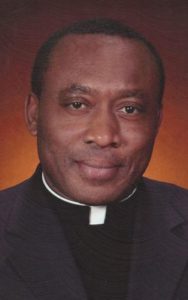 The other day, I watched a video that was posted on WhatsApp about a child who was helping his mother bring in some firewood into the kitchen. After he brought in the lighter ones, he embarked on bigger logs that were much heavier. This became a very big challenge. The load was heavy; the struggle was exhausting; his strength, sometime, failed him; but he was not going to be deterred or give up. He continuously found ways to accomplish this task. He cried, was frustrated, struggled, but never gave up until he brought that log of wood into his mother’s kitchen.

I was thrilled by this video and I believe that the little boy’s success came as a result of disciplined effort. It has always been my belief, as an immigrant youngster, that for us to succeed and achieve in this country, we have to strive beyond the easiest goals and reach beyond the merely obvious, because success is usually not given; it is, most of time, achieved. Scripture tells us that the discipline we get from our parents; the punishment for bad behavior; the scolding to get us on the right path of life, are done so that we can become the best version of ourselves (cf. Hebrew 12).

Truth be told, our journey in this country, as immigrants of African descent, is, ab initio, compromised. There is a bad rap and a negative disposition toward our skin; a bias that requires us to work, probably twice or three times as hard as our compatriots, in order for us to forge ahead. We don’t have the luxury of sitting and waiting for the remnants of someone’s fortune to be thrown our way. We can’t take the risk of letting chance determine whether we blossom or not. We cannot depend on the luck of letting our tomorrow be dependent upon someone’s beneficence. The God that created us has blessings for each of us that are uniquely ours. So, in order for us to go out there and obtain it, we need every ounce of strength and inner disposition that we can muster, and this is what parental discipline intends to brings to the table.

In that beautiful video, you could see that the little boy, initially, had great difficulty picking up that log of wood. But then he eventually did, and after a few steps, the wood fell off of his hands. He struggled to pick it up again and this time it was much easier and he walked a farther distance before he was challenged. Being disciplined allowed him to find new ways to accomplish the task without giving up and this, eventually, brought him to success. Success, undoubtedly, is a product of discipline; discipline that continuously challenges what we did yesterday and what we are doing today and what we will do tomorrow in order to succeed. Discipline helps us to realize that we are far greater and more capable than what we did yesterday, and that we can achieve greater things tomorrow than what we accomplished today. Yet, as Scripture says, “No discipline seems pleasant at the time, but painful. Later on, however, it produces a harvest of righteousness and peace for those who have been trained by it” (Hebrews 12:11).

To all our young people, let me say this: There is a victory out there for us to claim but the odds are stacked against us as African immigrants. Nigerian parents feel obligated to do everything they can to make sure that their children can claim victory over their destinies. Unfortunately certain things, in this life, cannot be obtained at the last moment. It takes one mistake for a whole life to be ruined. Accident cars are seldom wholesome again. It is better to be late, than the late. For parents, we must constantly evaluate whether our disciplinary methods are in the service of, or doing a disservice to, our intentions for the best outcome in our children. A disciplined life is a life worth living.