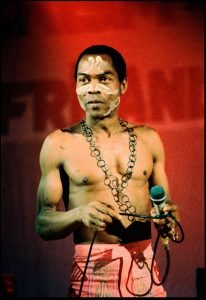 Fela Ransome Kuti (Olufela Olusegun Oludotun Ransome Kuti) was one of the most recognizable names in music. Born on 15 October 1938 and died on 2 August 1997, Fela was a multi-instrumentalist, composer, activist, bandleader, and Pan-Africanist.

He is regarded as the originator of Afrobeat, an African music genre that combines traditional Yoruba and Afro-Cuban rhythms with a spatter of funk and jazz. In 1958, after attending Abeokuta Grammar School, he was sent to London to study medicine, but he decided, instead, to study music at Trinity College of Music. While at Trinity College of Music, he formed the band Koola Lobitos. The band played a mixture of jazz and highlife in nightclubs.

When he returned to Nigeria in 1963, he reformed Koola Lobitos. He played, for a short time, with Victor Olayila before moving to Ghana to find a new music direction that became his famous Afrobeat. In 1969, Fela brought his band to the United States and stayed in Los Angeles for ten months. While in Los Angeles, Fela joined the Black Power movement and renamed Koola Lobitos Nigeria `70.

Upon the band’s return to Nigeria, their name changed again to Afrika `70. The spelling of Africa with a “K” highlights Fela’s rejection of colonialism and its accompanying teachings. He formed the Kalakuta Republic – a name derived from the infamous Black Hole of Calcutta dungeon in India. He later declared the Kalakuta Republic independent from Nigeria.

At the peak of Fela’s music popularity, Nigeria was in the throes of a violent civil war and struggled for freedom, good governance, and self-actualization.  Without fear of reprisal, he used his voice in music to highlights the struggles of Nigerians. Songs such as Zombie, Shuffering and Shmiling, and Mr. Follow Follow  made him a constant target of Nigerian military juntas.

When Fela died on 2 August 1997, more than one million people attended his Funeral at the old Shrine compound site.