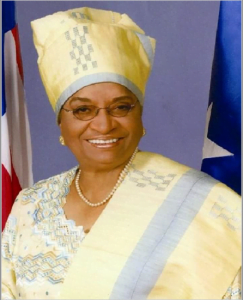 Our biggest heroes were once children. Ellen Johnson Sirleaf, born in 1938, is a Liberian politician who served as the 24th President of Liberia from 2006 to 2018. She was the first woman in Africa elected as president of her country, initially elected in 2005 and reelected in 2011. With unemployment running at 80 percent, Johnson Sirleaf faced serious challenges. She immediately sought debt amelioration and aid from the international community. By late 2010 Liberia’s entire debt had been erased, and Johnson Sirleaf had secured millions of dollars of foreign investment in the country.

Before her presidency, Johnson Sirleaf served as assistant minister of finance under President William Tolbert and as finance minister in Samuel K. Doe’s military dictatorship. She became known for her personal financial integrity and clashed with both heads of state. During Doe’s regime she was imprisoned twice and narrowly avoided execution. In the 1985 national election she campaigned for a seat in the Senate and openly criticized the military government, which led to her arrest and a 10-year prison sentence. She was released after a short time and allowed to leave the country.

She won the Nobel Peace Prize in 2011, in recognition of her efforts for the safety of women and for women’s rights as well as to bring women into the peacekeeping process. She has received numerous other awards for her leadership.

In 2016, she was listed as the 83rd-most powerful woman in the world by Forbes magazine.