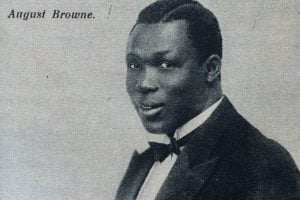 August Agboola Browne is one of the most celebrated patriots in Poland. He was born on 22 July, 1895, to Wallace and Josephina Browne in Lagos, Nigeria. At a young age, Browne moved to England onboard a British merchant ship. Shortly after arriving in England, he joined a performance group. During one of the group’s tours in Poland, Browne decided to stay.

His determination to join the Polish resistance movement – as the only black person to do so in World War Two – is proof that Nigerians are pioneers when it comes to fighting and advocating for freedom and liberty around the world. As a jazz musician in his forties, he had been in Poland for 17 years when he joined the struggle against the Nazi occupation in 1939. Browne fought under the code name “Ali” during the Siege of Warsaw, when Germany invaded. He also took part in the Warsaw Uprising, which ended 77 years ago.

As part of his Nigerian DNA of resilience, Browne survived in a war during which more than 95% of the residents of Poland’s capital, Warsaw, were either killed or displaced. He continued to live in Warsaw for many years after the war and the Warsaw Uprising, until 1956, when he moved back to Britain.

Although Browne was an exquisite dresser and a celebrated jazz percussionist, playing in restaurants and bars around Warsaw, he led a very private life. In fact, he may never have been known were it not for an application he filled in to join a Polish veterans’ association in 1949. A small memorial stone in the center of Warsaw commemorates Browne’s bravery for his adopted country and city. In this Black History Month, let us join the people of Poland in celebrating this brave Nigerian, August Agboola Browne.