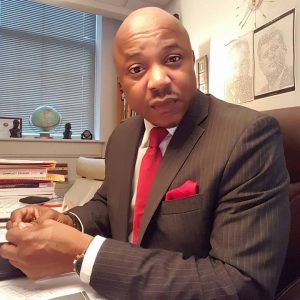 DANCE, NGOZI, DANCE! Knowing that the United States holds a big card of ace in the WTO’s Director General selection, and watching Dr. Ngozi Okonjo-Iweala sail to the final two candidates in the rigorous process, made me begin to doubt that she was as smart and qualified as her credentials and resume suggested. Watching Okonjo-Iweala make it to the final two, and knowing that Donald Trump had the de facto veto vote in the WTO’s DG selection, but had not exercised it against Okonjo-Iweala, made me suspect that Okonjo-Iweala might not be all that. And that was heart-wrenching for me.

You see, Donald Trump only goes for the worst of the worst, especially when it comes to the choice of women who work with him. Where do I begin? It’s a long list. Sarah Huckabee-Sanders (Press Secretary), Betsy DeVos (Education Secretary), Kellyanne Conway (Counselor to the President), Dr. Stella Immanuel (the hydroxychloroquine wack job), Melania Trump (wife), just to make a few. Donald Trump, as a weak and mentally insecure man, is terrified by exceptionally smart, accomplished, and powerful women. To avoid crossing paths with them, Donald Trump will do any and everything to frustrate the prospect of working with such women, and would rather settle for the less smart, less accomplished, women.

So, if Donald Trump had not pulled rank on Dr. Okonjo-Iweala, I would have concluded that Okonjo-Iweala belonged in the class of Betsy DeVos and Sarah Huckabee-Sanders, and that would have been a sad day for me and for Nigerians. By refusing to back Okonjo-Iweala’s candidature, even when the European Union had done so, Donald Trump, ironically, canonized Okonjo-Iweala.

Let it not be a sad day in Nigeria. When the countries of the European Union, led by smart leaders, give you their unanimous backing, but you are blocked by the American dimwit, who is scared off his pants by powerful women, raise your head up high, walk tall, and wear the latter’s rejection as a badge of honor.It’s a win for my beloved sister. It’s a win for all powerful women. It’s a win for those of us who held our breath, wondering if Ngozi belonged in the same class and category as Sarah Huckabee-Sanders, Betsy DeVos, Melania Trump, and the alternative reality world of Kellyanne Conway. She does not – not by a long shot. It’s a win! So, dance on, Ngozi, dance on. Dance and Dazzle. Add to your resume: one powerful woman Donald Trump is too weak and too insecure to work with. Let that saxophonist work that embouchure to its high pitches and make you dance.