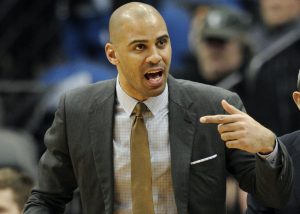 On Wednesday June 23, 2021, Boston Celtics, one of the most celebrated teams in the NBA, announced that it has hired Nigerian-American, Ime Udoka, as head coach to replace Brad Stevens who transitioned to the position of Head of Basketball Operations. Udoka is the first Nigerian-American to be appointed to the position of head coach in the NBA. Nigerians in the United States and around the world are excited about this announcement, which is clearly another notch in the belt of high-flying Nigerians in the Diaspora.

Udoka was born on August 9, 1977 to a Nigerian father and an American mother, and has represented Nigeria in international basketball competitions, including the 2006 FIBA World Championships. Udoka embraces his Nigerian origin and epitomizes all that is good in Nigerian parenting. In a rave review of Udoka as part of the screening process, NBA executive and USA national coach, Gregg Popovich, described Udoka as a “fundamentally sound teacher” who is comfortable in his own skin. According to Popovich, Udoka “exudes a confidence and a comfort in his own skin where people just gravitate to him”.

Before landing the prestigious position in Boston, Udoka had an illustrious basketball career from college to the NBA where he played for the Portland Blazer, starting in 75 games during the 2006–07 season. He played 28.6 minutes per game while averaging 8.4 points, 3.7 rebounds, and 0.9 steals. He also played for the San Antonio Spurs and the New Jersey Nicks before retiring from the league. His coaching career includes assistant coaching positions for the Spurs, Philadelphia 76ers and Brooklyn Nets.

Nigerian Parents Magazine welcomes Udoka to Boston and wishes him a very successful career in the City.