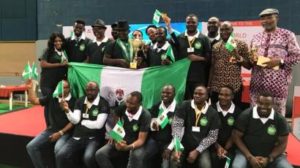 How Nigeria got so good at competitive Scrabble

By Oluwatosin Adeshokan 6 hours ago

It is 2019 and the Nigeria Scrabble national team has won the World English Scrabble Players Association Championship [WESPAC] title a third time. Since the inception of WESPAC in 1991, no other African nation has won the championship until Nigeria did in 2015 and then in 2017.

Nigeria and Nigerian Scrabble players have enjoyed a meteoric rise to the top of the world in recent years. After finishing eleventh in Malaysia in 2009 and third in Mumbai in 2007, Wellington Jighere beat Britain’s Lewis Mackay in the final to become Nigeria and Africa’s first-ever world Scrabble title winner. Inside the continent, in 2018, Moses Peter won the 2018 African Scrabble champion in Kiriyangi, Kenya giving Nigeria the individual and country trophies for the 12th consecutive time.

Even though English is the official language of Nigeria, as a former British colony, with more than 200 local languages and 400 dialects spoken, it is not a given the West African country would dominate on the global stage in a competition based on English.

There are over 4,000 players in more than 100 Scrabble clubs scattered around Nigeria, says Ikolo. “We have clubs formed in living rooms with just seven players that are nationally recognized, down to all the players in the clubs,” he says.  In the early ’90s, Nigeria’s central government recognized scrabble as a sport. Unlike a lot of other governments in Africa, there is infrastructure set for players and coaches on government payroll and competitions supported with grants.

While there is some government and philanthropic support for the game, much of it has dwindled in recent years, says Ikolo. “These days, Scrabble competitions are sponsored by wealthy Nigerians, a few corporates and sometimes the Scrabble clubs,” he says.

Febisola Olanipekun a cybersecurity analyst in Lagos stumbled on Scrabble while in her third year at the University. After just watching and playing with the university team, she joined and ended up winning two gold medals and two silver medals at the Nigerian Private University Games in Delta state. But she believes her victory was a fluke. “I got on the team and won because I knew words and read the dictionary. Scrabble is a lot more than that. You have to be technical about your gameplay and your opponent”.

Observers have argued Nigerian players have been able to dominate tournaments with a strategy of playing shorter words even when longer words are available. It’s a tactic that has seen 13 Nigerians ranked in the top 50 in the world. In his 2015 final with Lewis Mackay, Jighere’s winning word for 36 points was the five letter F-E-L-T-Y.

While some longtime Scrabble players have described that strategy as defensive Ikolo pushes back at that idea.“What is most important is that I protect my home, then I’m able to decide how to put pressure on my opponent” he declares. “Nigerians will rise to any challenge, even players that they know and love”. But Olanipekun explains because of the quality of Scrabble players in the country, players have to be intentional about gameplay and that makes adapting to a “defensive approach” the logical thing to do.

Younger and younger players are getting into scrabble today. A few schools are starting to include Scrabble in their curriculum. Parents are embracing games like scrabble and chess as “intelligence boosters”.

Olukayode Omoyeni a Lagos-based engineer believes that because of the ease of access to games like Scrabble, there is hardly a reliance on a set system for how to understand the game. “With little money and a dictionary, in a few months, you become good at Scrabble.” Omoyeni whose daughters have won awards in Lagos for chess explains that scrabble, like chess, is a game, but also a hobby. “On Saturdays, I would play scrabble and chess with my daughters, just for the fun of it. But, I know that they are building associations that are strengthening their intelligence.”

This article was first published by Quartz Africa