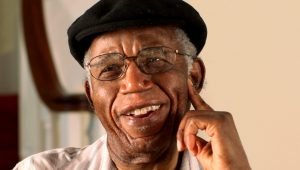 Albert Chinụalụmọgụ Achebe, perhaps the most celebrated African writer of all time, was born on November 16, 1930, and died on March 21, 2013. Achebe, who hailed from the town of Ogidi in southeastern Nigeria, was a novelist, poet, critic, and professor. He attended Government College Umuahia. His academic excellence earned him a scholarship to study medicine, but he changed his studies to English Literature at the University College, now the University of Ibadan. Achebe became interested in understanding how world religion became a disruptive force in traditional Igbo culture. He began writing stories as a university student. After graduation, Achebe worked for the Nigerian Broadcasting Service (NBS).

In the late 1950s, Achebe gained international acclaim for his novel Things Fall Apart – the most widely read book in modern African literature. The book was translated into more than 50 languages worldwide. He also wrote No Longer at Ease, Arrow of God, Man of the People, and Anthills of the Savannah. In 1975, Achebe gave a controversial lecture titled “An Image of Africa: Racism in Conrad’s Heart of Darkness.” This lecture was critical of Joseph Conrad as “a thoroughgoing racist” and was later published in The Massachusetts Review

Achebe lived in the United States for several years in the 1970s. When he returned to the United States in 1990, Achebe started an eighteen-year tenure at Bard College as the Charles P. Stevenson Professor of Languages and Literature. Until he died in 2013, Achebe served as Professor of African Studies at the prestigious Brown University. NPM is so proud of this Nigerian icon.